The Wm Hawkins Folio began as a bibliographic project, intended to document as completely as possible William Hawkins‘ catalogue of work. During the research and writing of the descriptive bibliography which now comprises half of the folio, William Hawkins gave his blessing to reproduce several of the legendary poster poems of the 1960s.

The poster poems were collaborations between Hawkins and visual artists working in Ottawa (among them Robert Rosewarne, Christopher Wells, Fran Jones and Andries Hamaan). The original posters measured two feet by three feet, approximately, and were produced on a “130 year old Washington Press.” The posters were sold for beer money, or posted around Ottawa in public places. They are incredibly rare items.

The folio collects the aforementioned descriptive bibliography, colour reproductions of four of the 1960s poster poems (“King Kong Goes to Rotterdam”; “Postage Stamps”; A Song of Flowers”; “Rubber Boots”) in letter size, an ad for the poster poems, two newspaper articles from the 1960s, and a further poster poem from 1980 (“Still Life”). The cover of the folio is a reproduction of Barbara Caruso’s cover for Ottawa Poems (Weed/Flower Press, 1966). 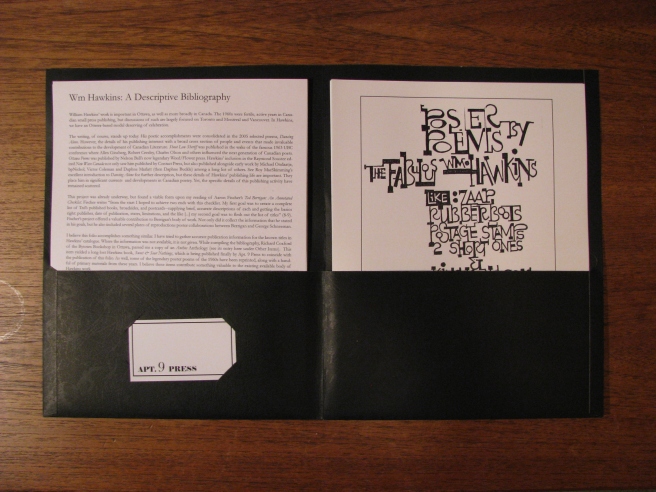 24 November 2010 | Allison Smith at The Wig spoke to Apt. 9 on the eve of the reading by William Hawkins, Leigh Nash and Peter Gibbon.

One thought on “Wm Hawkins Folio”