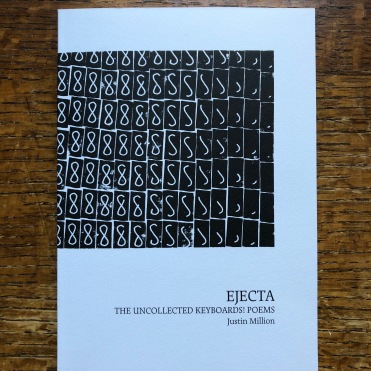 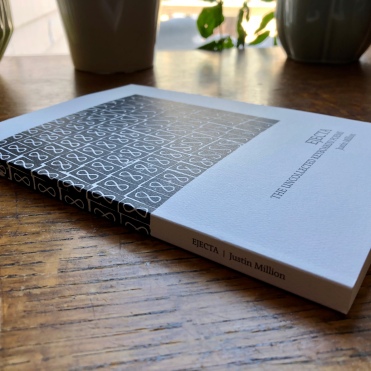 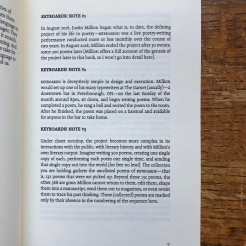 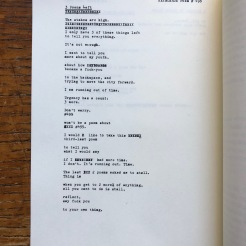 In August 2016, Justin Million began KEYBOARDS!—a live poetry-writing performance conducted more or less monthly over the course of two years. In August 2018, Million ended the project after 30 events, some 500 poems later. At each KEYBOARDS! event, Million would set up one of his many typewriters at The Garnet (usually)—a downtown bar in Peterborough, ON—on the last Sunday of the month around 8pm, sit down, and begin writing poems. When he completed a poem, he rang a bell and recited the poem to the room. After he finished, the poem was placed on a barstool and available for anyone in the bar to take home. See video of the final event here and read an interview with Million at Open Book here.

Ejecta gathers the “uncollected” poems of KEYBOARDS!—that is, the 132 poems that were not picked up—in facsimile reproductions of the original typewritten pages. These uncollected poems are surrounded by contextual materials both to document the series and to underscore its undocumentability. In addition to the poems, Ejecta contains an introduction by Cameron Anstee, Justin Million’s “Typewriter Talk,” a roster of the typewriters used, and a chronology of the events. 144 copies contain an original KEYBOARDS! typescript.