I have been quietly updating individual book pages with reviews and notes as they appear, but haven’t been promoting those reviews here on the main page. Below you’ll find notes on our 2015 books. Thanks to everyone that took the time to read and think about our publications this year. If you said something somewhere about any of our chapbooks and we’ve missed it, let us know! 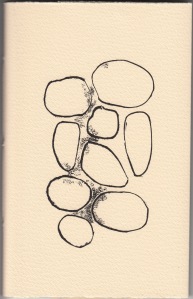 29 December 2015 | Ryan Pratt: “With each recent title from the prolific, Paris, Ontario based author, we’ve been gifted stunningly clairvoyant poems in Ball’s minimal style. And Small Waterways is perhaps the sharpest, accenting stark vistas with almost imperceptible, existential flourishes that balance his explicit sadness with a renewed acceptance.”

18 November 2015 | Pearl Pirie: “Beautiful encapsulations. Simple but not simplistic. Thought over not to make clever but to make clear as if drawing a line around one awareness. Not around an object or a story or an image but a small eureka, not tied up with a ribbon of form but the size it needs to be.”

17 November 2015 | rob mclennan: “And at thirty pages, Small Waterways reads as a substantial collection (in chapbook terms, at least) of powerful poems, some of which read like sketched out notes, some as deep meditations and others as small thoughts stretched to beyond their outer limits.”

15 December 2015 | Amanda Earl: “What I love about them and what will make me return to them is their elegance and their shape. White space and the shape taken up by each poem is part of the beauty of this chapbook.”

17 November 2015 | rob mclennan: “There is such a quality of meditative calm in Casteels’ poems, set down with incredible density, but a remarkable amount of silence and breath.”

On Lillian Nećakov’s The Lake Contains an Emergency Room:

1 July 2015 | Christopher McCarthy at Flat Singles Press: “There is a surrealist timbre to the eighteen poems featured in the new sequence; however, this effect is well balanced, emotional, and immediate.”

19 June 2015 | rob mclennan says there is “an odd humour and compelling candor to the surrealism of Lillian Nećakov, one that seems very human in nature.”

And on Marilyn Irwin’s the blue, blue there:

29 December 2015 | Ryan Pratt: “Grounded and gut-punching poems like “murder, old ottawa south” and the stratosphere-ricocheting “transmigration of the soul and other no-no’s” stake opposite ends of Irwin’s yardstick, respectively. But the vast middle tackles the likes of Kim Jong Un, a dead deer in the woods and the FLNJ (le Front pour le Liberation des Nains de Jardin) with a flexible curiosity that accepts the chaos of life, and demands revisiting.”

22 December 2015 | rob mclennan includes the blue, blue there in his 2015 roundup at Queens Mob Teahouse.

15 June 2015 | rob mclennan says that the poems in the blue, blue there are “quiet and sharp, insistently present and remarkably calm.”

Did you say something about one of these books and it isn’t included above? Let me know!

Cameron Anstee lives and writes in Ottawa ON where he runs Apt. 9 Press and is pursuing a PhD in English Literature at the University of Ottawa. View more posts